To share your memory on the wall of Robert Monroe, sign in using one of the following options:

Provide comfort for the family of Robert Monroe with a meaningful gesture of sympathy.

We encourage you to share your most beloved memories of Robert here, so that the family and other loved ones can always see it. You can upload cherished photographs, or share your favorite stories, and can even comment on those shared by others.

Posted Feb 14, 2019 at 12:00am
Joe - May God surround you and your family with peace, strength, and comfort during this difficult time.
Comment Share
Share via:
RT

Posted Feb 13, 2019 at 12:00am
Joe and Joyce, So sorry to hear of the passing of your father. My prayers are for the Lord to comfort you. Hold those memories tight. Let me know if you need anything.
Comment Share
Share via:
BB

Posted Feb 13, 2019 at 12:00am
I am so very sorry for your loss. Thoughts and many prayers for your family. He will be missed by many of us at the Laurels. Will miss counting the many rounds he made daily and smile. Oh I must not forget the daily okie dokie. Memories r so very special. Loved him dearly. Thank you,
Comment Share
Share via:
CC 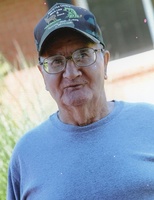